Christi cares for her aging mother-in-law as well as a son with diabetes. She also provides long-distance help to her parents living across the country.

Christi and Mike, living in Princeton NJ, care for Mike’s mother Maria. Though Maria still lives on her own, in a home next door with her cat Manny, she needs a lot of help, as she has several serious health issues including the early stages of dementia. Many others also help care for Maria. This includes Cindy and Julie, home care aides, one of whom is there most weekdays. Mike’s sister Maggie, brother Steve, and sister-in-law Claire all live about two hours away, in Connecticut or Philadelphia, so they help when they can but it’s infrequent. Once or twice a week Maria goes to a local daycare facility The Oaks. She sees many doctors; most often she sees Dr Ali, Dr Miller and Dr Sandoval.

Christi is also involved in the health of her parents Eileen and Jim, who live in Florida. Day to day they rely on each other, and Christine’s sister Janet, who lives near them, visits at least once a week. But whenever there’s a major decision to be made, everyone relies on Christi to figure things out.

Mike’s father Arturo lives on his own in Baltimore, and is doing pretty well for his age. But Mike and Steve worry. Steve checks in on him every week, and Mike visits as often as he can.

At home, Christi and Mike have two children, teenager Maya and ten-year-old Pablo, and a dog Spot. Pablo has type 1 diabetes. He is pretty good about watching what he eats, monitoring his glucose level and such, but his parents, especially Christi, are always watching, on alert for something to go wrong. Maya is also a big help, watching out for her kid brother, but she’s got her own busy life. There’s also a school nurse who helps Pablo.

Christi counts on emotional, and often practical, support from her two close friends Ruth and Angela. Both Christine and Mike get support and information on a Facebook Group for “sandwich caregivers”.

Christi describes how she drew her CareMap. 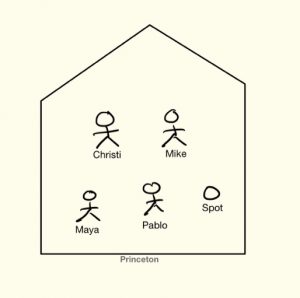 I start my CareMap by drawing myself and my family, in our home. 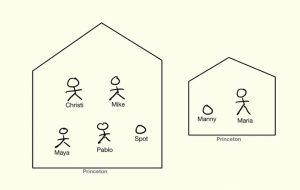 The people I care for are Pablo, who’s already on the map, and Maria. So I’ll add Maria and her cat in their own home. 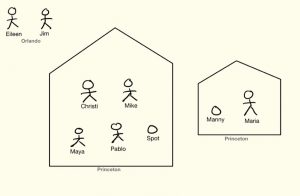 And there are my parents, Eileen and Jim. 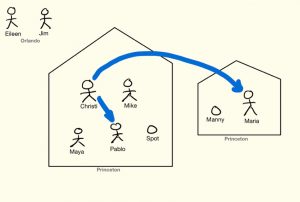 For both Pablo and Maria, I care for them many times a day, so they get big arrows 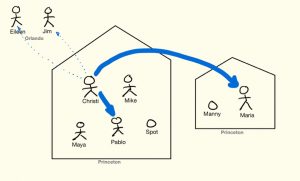 My parents live so far away, that I only help occasionally. 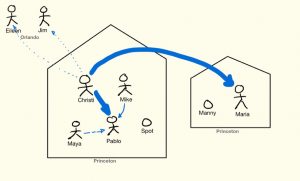 Who else cares for Pablo? That includes both Mike and Maya. 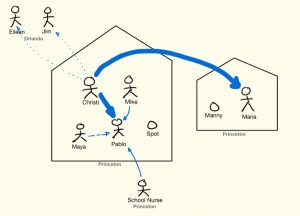 And a school nurse. 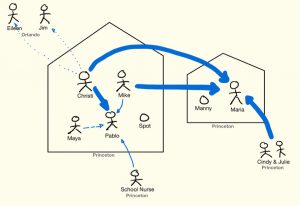 Who else cares for Maria? Mike also helps many times a day. As do one of Cindy or Julie, two home care aides. 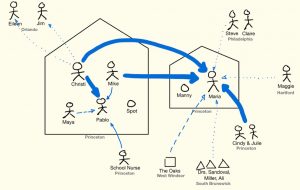 There is a day care center the Oaks, and three doctors: Sandoval, Miller and Ali. 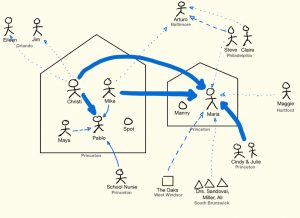 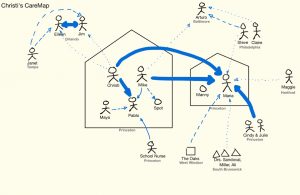 As for my parents, I’ll add my sister Janet. And show that they take care of each other. 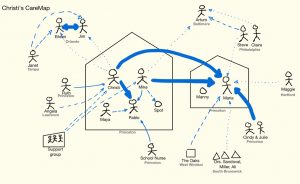 As for who cares for me, there are my two friends Ruth and Angela. And the support group for both Mike and me. 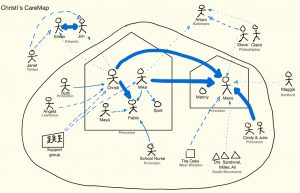 Many of these people are within 20 minutes. 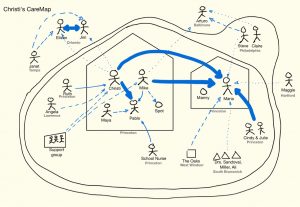 And Steve and Claire are within 2 hours.

Use the Atlas CareMap Worksheet to help you think about all the information you need for your CareMap.

For additional examples, check out Fay’s CareMap and Nadine’s CareMap