Only child Fay (30s) cares for her mother Josephine (70s) who has Alzheimer’s. With no one to help her, she has put her PhD studies on hold to provide 24×7 care.

Fay is a graduate student and an only-child. She was raised in Southern California by a single parent, her mother Josephine. She and her mother are very close.

Fay left for college and then worked on the East Coast for several years before returning to California to start a public health PhD program near San Francisco. A few months ago she took a leave from her studies to devote herself full-time to caring for Josephine.

Josephine, who is in her 70s, had been living by herself and doing well, until about two and a half years ago when she was hit by a car. She broke her leg and several other bones. Though she recovered, she is no longer as fast or mobile as she once was, and movement is more painful now. In addition, Josephine has developed arthritis and often has gastrointestinal issues.

Initially Fay hired an in-home caregiver to help Josephine (in Los Angeles). But soon after that, Josephine moved to the Bay Area to stay with Fay “for a while” to help her recover, which meant Fay’s housemate had to move out. Fay began to notice her mom’s memory was worsening, so Josephine has continued to stay with Fay.

Josephine requires near-constant oversight. Her memory and decision-making skills have deteriorated. The result, for Fay, has been an impactful change in her mother-daughter relationship. From small household decisions to large financial planning ones, Fay must constantly make decisions for both herself and her mother. As she faces potentially increasing expenses for Josephine’s care, having no income compounds Fay’s worry.

Fay describes how she drew her CareMap. 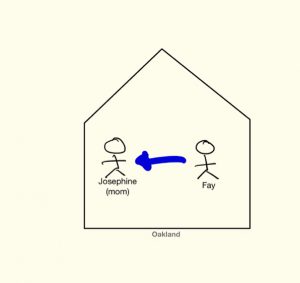 Who do I care for? I care for my mom many, many times a day, so that’s a big fat arrow. 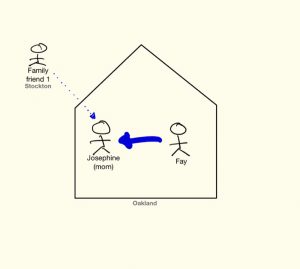 Now to add the other people caring for mom. There’s our family friend who lives about an hour away. She gets a dotted line. 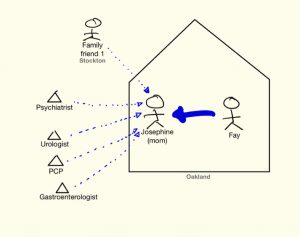 There are also the doctors. 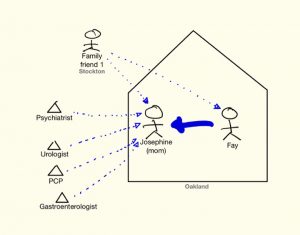 Adding the people who care for me, Friend1 is a big emotional support for me. 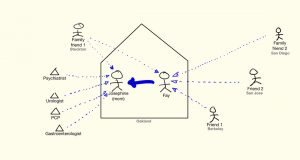 As are Friend2, who lives in Southern California, Friend3 who lives not too far away, and Friend4 who lives nearby. 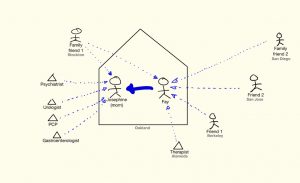 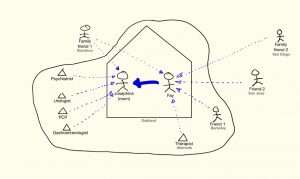 I’ll circle the people nearby. 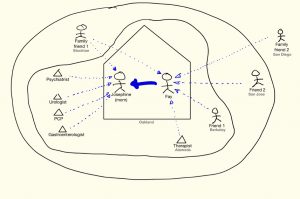 And another circle to include those within a couple of hours.

So, that’s my CareMap. It shows that on a day-to-day level, it’s all on me, though my friends are a big emotional support.

Use Atlas CareMap Worksheet to guide you through thinking about the information you need for your CareMap.

Check out additional examples with Nadine’s CareMap and Christi’s CareMap.