Nadine (50s) lives with her husband Jerry and two teenage sons, Larry and Karl. Karl has Type 1 Diabetes. Nadine is his primary caregiver.

Nadine and Jerry live with their sons Larry and Karl in an urban part of the San Francisco Bay Area. Jerry is an engineer in the technology industry. Nadine was a lawyer, but when Karl was diagnosed at age four with Type 1 Diabetes (T1D) she retired early to care for the children.

Karl is now a teenager. With age, he has become more proficient at self-care. He is alert to blood sugar highs and lows, and knows how to check glucose levels. He also self-administers glucose pills when needed. Despite this, Nadine is still heavily involved and bears primary responsibility for his health.

Nadine assists and monitors Karl throughout each day. Meeting this responsibility requires a state of constant vigilance, even when Karl is away from home. When Karl is at school or soccer practice, or out playing with friends, she regularly monitors his glucose level through her mobile phone and communicates with him as needed. Jerry provides additional support, especially when Nadine is not around, but he is less comfortable and not as confident with the caregiving responsibilities that Nadine manages.

Outside the home, Nadine has identified several people who could help Karl in an emergency. She trained two immediate neighbors in basic T1D management, as well a friend who lives a few minutes away.

Karl’s primary source of professional care is an endocrinologist located 45 minutes away. During the first year after Karl’s diagnosis a major nearby medical center provided a closer source of care, but ultimately the family was dissatisfied with the advice they were receiving. They switched to their current endocrinologist and have been happy despite the distance.

Nadine receives emotional support from several sources, including two nearby friends whom she sees weekly. Nadine is involved with several local groups. She interacts daily with an online community of other mothers who care for children with T1D and is active in the local T1D community. While she receives support from the latter, she also puts a substantial amount of work into keeping the community going. 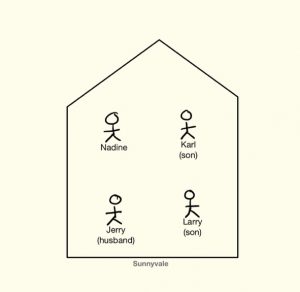 So, let’s start drawing … Here’s me and my family, in our home. 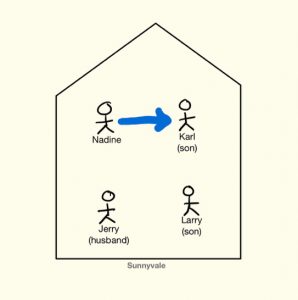 I care for Karl many, many times a day, so that’s a big fat arrow. 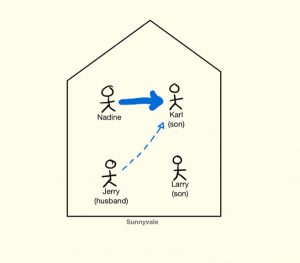 Now to add the other people caring for Karl. Jerry helps Karl once a week or so, if I’m not around. 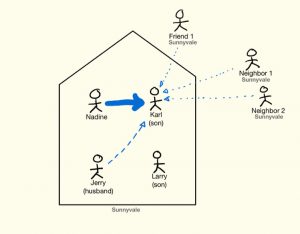 Friend1 and the neighbors are available to help, but its really rare that they have to do anything. 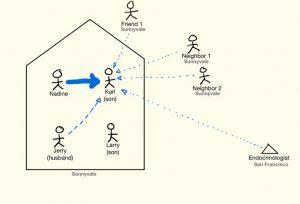 And Karl sees his endocrinologist every 6 months. 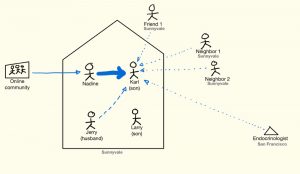 Adding the people who care for me, an online T1D group is a big emotional support for me. 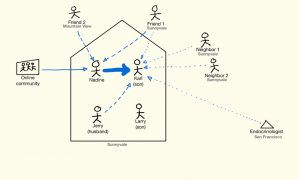 Friend1 and friend2 also support me, and I see them every week. 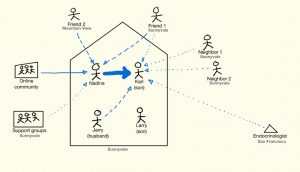 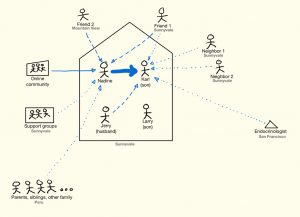 My parents, siblings, and that whole family, live very far away. 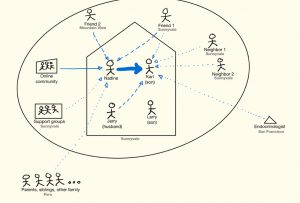 Most of this group is nearby. 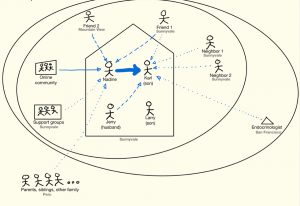 The endocrinologist is about an hour away.

Use Atlas CareMap Worksheet to guide you through thinking about the information you need to draw your own CareMap.

Check out additional examples with Fay’s CareMap and Christi’s CareMap.