Mapping Santa Barbara had two project elements. One was to “Explore CareMap Adoption and Impact” through exposing many people to the Atlas CareMap concept and exploring how the partner institutions could incorporate Atlas CareMaps into their own efforts. (An Atlas CareMap, simply described is a diagram of a family’s care ecosystem, showing who is caring for whom and how.)

Overall, more than 100 people participated in twelve Atlas-led CareMap Workshops, held in either English or Spanish. These Workshops taught participants how to hand-draw their own Atlas CareMaps, and how to learn from and act upon what they had drawn..

Many workshop participants reported major changes in their lives resulting from what they discovered about their own caregiving situations, and from subsequent conversations with family members. The ripple effects have been very strong, as participants have gone on to teach the Atlas CareMap to hundreds of family, friends, colleagues, and other other community members. As a result, many organizations across Santa Barbara County, private and public, have adopted Atlas CareMaps as fundamental to their efforts and/or are eagerly exploring how to do so. The Santa Barbara Foundation is now requiring future caregiving-focused grantees to incorporate Atlas CareMaps into their work, as is the local Area Agency on Aging (the first time they have ever imposed such a requirement).

“When the project launched, we didn’t know what we were in for and what an amazing opportunity it was! The findings were nothing short of transformative—both on a personal level and a community level,” said Phylene Wiggins, Senior Director of Community Investments, Santa Barbara Foundation

For more information about Mapping Santa Barbara, and of the experience of the Promotores a year later, we invite you to download these reports. 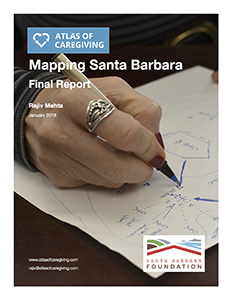 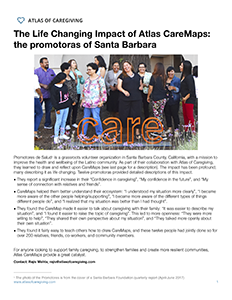 The Life Changing Impact of Atlas CareMaps: the promotoras of Santa Barbara