The March 2020 issue of The Atlantic includes an article by David Brooks “The Nuclear Family Was a Mistake”. He writes “The family structure we’ve held up as the cultural ideal for the past half century has been a catastrophe for many. It’s time to figure out better ways to live together.”

It’s a must read.

Brooks notes that “for vast stretches of human history people lived in extended families consisting of not just people they were related to but people they chose to cooperate with.” Kinship was something you chose. In modern phrasing you lived in a “family of choice”. Extended families, including relatives, neighbors, friends and others, were the norm. But over the past couple of centuries, influenced and supported by economic advances, government policies, and changing social norms, the small “nuclear family” (parents and young children) became ever more common. 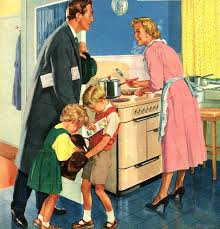 This peaked in the 50s and 60s, and was quite a successful model for living. Key to its success was the division of labor, where the man worked out of the house and the woman was relegated to raising the children and household chores. What was remarkable about this period of nuclear family success was how short lived it was. According to Brooks, it lasted just fifteen years.

Today, this model remains as a cornerstone of the American family, and yet, it is not a successful model of living.  Unfortunately, Brooks points out that today you have to be relatively well off to live successfully as a nuclear family, by paying for services that used to be provided by the extended family (child-rearing, caregiving, mentoring, coping with life’s shocks, etc.). For the working class and poor, the current situation is a disaster. They cannot pay for such services, and society throws up numerous obstacles to the types of extended families of the past.

Brooks closes with a sense of optimism, by highlighting new family paradigms that are emerging.

Over the past several decades, the decline of the nuclear family has created an epidemic of trauma—millions have been set adrift because what should have been the most loving and secure relationship in their life broke. Slowly, but with increasing frequency, these drifting individuals are coming together to create forged families. These forged families have a feeling of determined commitment.

This article resonates so strongly with what we’re doing at Atlas. Through our Mapping Ourselves program, we help people see the actual families they exist within and the extended community they are connected to. Paying more attention to all the care they are providing and receiving helps people reflect on their kinships and the people around them who influence their well-being. They learn to understand and appreciate the relationships they already have, and to consider how they might strengthen and grow important bonds.