On Valentine’s Day, the Atlas team conducted the second workshop in a series for the Youth Advisory Council in Fremont, Michigan as part of the We All Care Initiative.  This was the first time we had asked any group we have worked with to draw a second CareMap.

Over three weeks had passed between the first and second Mapping Ourselves workshops. As “homework” we asked the high school students to think about their CareMaps and speak about what they had drawn with their families. Some did, some didn’t. Some taught their parents and siblings to draw their own CareMaps. Others considered the lines on their CareMaps that indicated the frequency of care given or received in a relationship.

One of the students talked about how he took action based on his observations of his first CareMap. 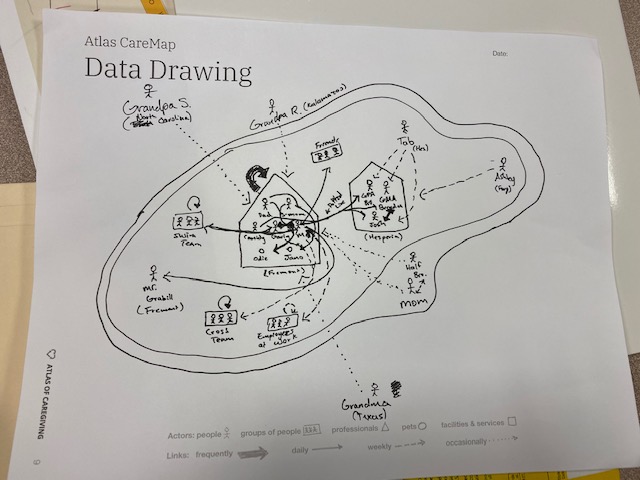 This was the student’s first drawing. He noticed that his Grandma in Texas cared for him occasionally but he didn’t provide her with any support.

He took action and reached out to his Grandma, actively showing her that he was thinking about her and that he cared for her.

In his second CareMap he drew a relationship line that indicated weekly care back and forth between his Grandma in Texas and himself. Notably, he also included her entire household, and considered how they each cared for each other. His interaction with her increased and he gained an appreciation for her care ecosystem.