Fifty extraordinary and passionate people from around the world met for five days in Salzburg, Austria to discuss “Changing Minds: Innovations in Dementia Care and Dementia-Friendly Communities”. The event was organized by the Salzburg Global Seminar, and held at the fabulous Schloss Leopoldskron.

I was delighted to be invited to join a group of world experts to discuss this important topic, but I wondered … Would the participants find much value for their own efforts in what Atlas of Caregiving is doing? Would a community that is generally disease-centric and patient-centric be open to the Atlas’s family-centric / ecosystem-centric approach? I knew the seminar organizers, who had invited me, were interested in having my views expressed, but how would they be received by everyone else?

The urgent issue to be addressed at the seminar was clearly laid out in the conference overview:

Dementia has been identified as one of the most serious and growing health challenges for health care services, social care, and communities and families, especially in countries with aging populations. The total global costs of dementia in 2015 were estimated to be nearly 1.1% of worldwide GDP. Traditional health care models often fall short for people and families affected by dementia because of the complexity of the co-morbidities experienced in later life and because these models focus primarily on the physical health process and not on the full lived experience. We need to develop new models of integrated care and community preparedness to meet this challenge. 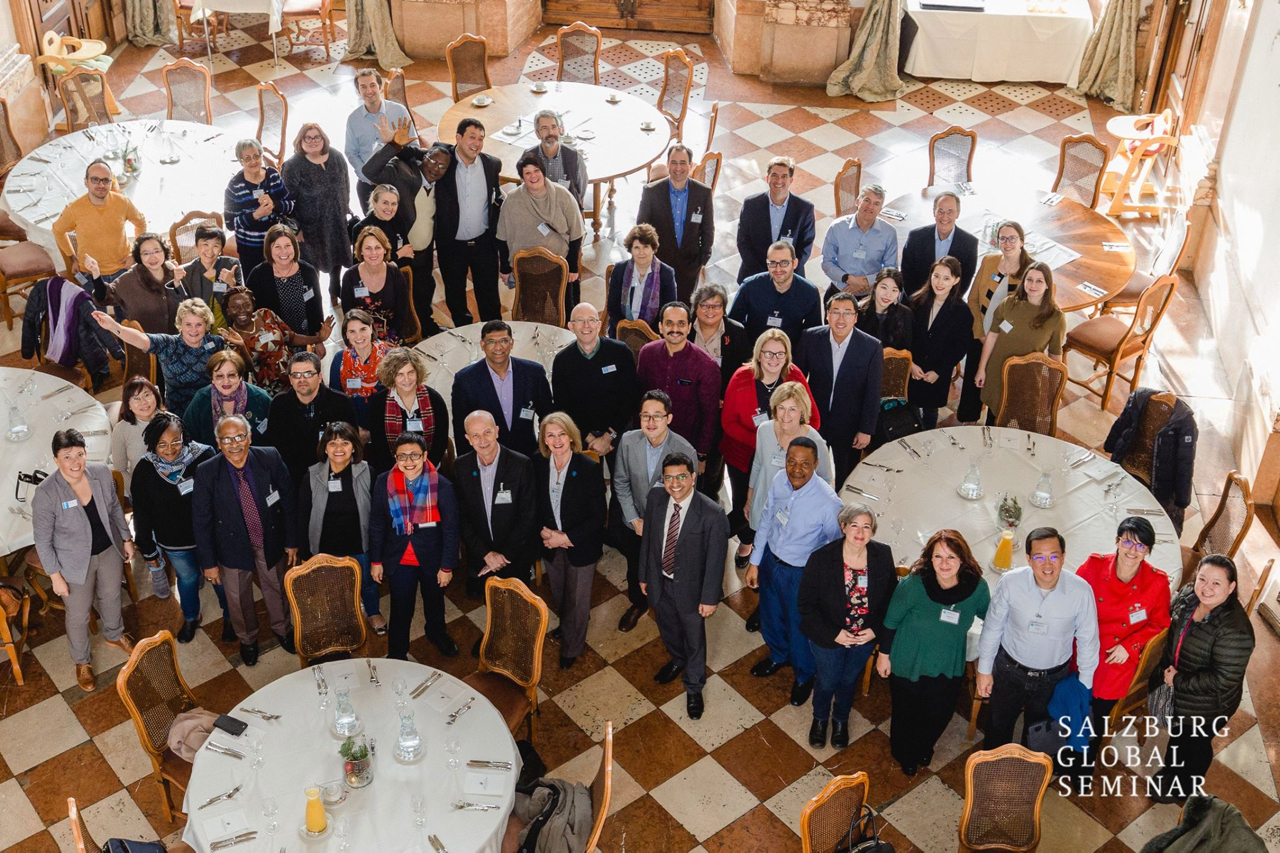 Two key topics of discussion were the hows & whys of earlier diagnosis of dementia, and strengthening community responses to people and families dealing with dementia.

I learned that dementia is seriously under-diagnosed all over the world, despite the fact that it can be easily diagnosed by appropriately-trained people. Sometimes this is because patients and families don’t seek medical attention for “unusual behavior” or out of embarrassment. Other times this happens because of doctors’ unwillingness or inability to diagnose properly. The session included full, active participation by two people with dementia. One reported that, after sensing they had dementia it took them three tries to get an official medical diagnosis. In many countries, the fact of under-diagnosis leads to continued under-diagnosis. Because the government and the medical establishment only sees a small problem they won’t allocate more resources for more diagnosis.

But, there are both pros and cons to whether to get an early diagnosis of dementia. Many argued that having an early diagnosis offers people: the comfort of knowing what is going on; an opportunity to prepare well for the future; a way to tell people (family, friends, neighbors, others) what is going on so they can respond appropriately; and to take actions that could significantly increase their quality-of-life. On the other hand, there are no medical “cures” on the horizon, and current society (laws and customs) often make it difficult for those diagnosed with dementia to live life to the fullest. Without an appreciation of the spectrum of dementia, people may assume all those with dementia act in only the most difficult ways. Also, misdiagnosis can lead to mistreatment resulting in real harm, so we mustn’t be cavalier about diagnosis.

Given that there is very little the medical community can do for people with dementia, supporting such people is almost completely up to other sectors of society: family, community, and social services. Therefore there was much conversation and knowledge-sharing about creating “dementia friendly communities”.

Even the term “dementia friendly community” was debated. Is friendly good enough, is just being “nice” to people with dementia good enough? It was suggested that we should aim for “dementia inclusive community”, in which people with dementia are encouraged and allowed to participate in society as fully as they are able and inclined. Not to be put to the side and protected, but able to work, move, shop, play, etc. as much as they would like to. A related idea was “dementia capable community” in which an active effort is put into ensuring that the community is deeply knowledgeable about dementia, and so is capable of fully supporting people with dementia. (This reminded me of the World Parkinsons Congresses I have attended, and the efforts made by the conference organizers to educate people in the host cities — airport staff, taxi drivers, restauranters, etc. — about how to best serve people with Parkinsons.)

One of the most eye-opening aspects of the seminar for me was being exposed to the wide range of efforts and contexts around the world. Nearly half the participants came from outside the US and Europe.

From Japan’s Takehito Tokuda, I learned of “Run Tomorrow”, an initiative by Japan’s pioneering dementia friendly social innovators. Volunteers run or walk, some for miles and others for a few yards, in a relay extending the full length of Japan, from the northern tip of Hokkaido down to Okinawa, passing on a sash as they go (see the film). I love this quote from their website “‘DEMENTIA? OH, OKAY.’ – that’s how normal it should be. We should be able to live without making a big deal of it.”

Indonesians DY Suharya and Amalia Fonk-Utomo, founded Alzheimer’s Indonesia, and in just a few years have done amazing work, with great creativity, to generate widespread support and actions for dementia in their country.

From Zulema Villalta Bolaños, Erika Salazar and Norbel Roman Garita, I learned that Costa Rica seems to be setting a standard for creating a humane and cohesive society. Many countries are considering how to build and support good dementia-appropriate long-term care facilities. Costa Rica has moved past that. They have decided that institutionalization is in fact not in the best interests of those with dementia. So they are shutting down such institutions, and moving people back into the community, into the homes of families willing to care for them. The government then provides financial support to such foster homes.

Singapore has about the same population as Costa Rica, but a much richer economy, and a very different culture. One with an expectation of self-reliance within established structures. The Singapore delegation (Weng Mooi Tan, Jasmine Wong, Leong Ying Yong, and others) described the extensive efforts they are making.

Kikelomo Edwards, Babatunde Agbaje, and Omini Oden helped me understand the unique and daunting challenges they face in Nigeria. Kiki’s tenacity, courage and poise in the face of so many difficulties was inspiring, while Tunde’s and Omini’s eagerness to bring their talents to the cause gives hope that progress can be made.

There were also participants from India. Though given the enormous diversity of India, it’s best to be clear and note that they were from the states of Kerala (Mohammed Asheel and Major Gopalkrishnan KP) and Goa (Amit Dias). These two states “compete” to be the most humane and progressive. Mohammed arrived at the seminar with a mission to find innovations to try and successful programs to deploy across Kerala, as his government has already set aside funds for such efforts. With about 35 million people (only slightly less than California), they always have to be cognizant of how to scale and fund good programs, but they seem to be quite creative in finding ways to do it.

From Germany’s Reimer Gronemeyer, I learned about the crisis of social disintegration they face, with increasing numbers of people living alone, and the decline of volunteerism. These trends make the challenge of creating dementia friendly communities even harder.

My initial qualms about how well Atlas’s efforts would be received were set aside very quickly. Several participants already knew about Atlas of Caregiving and CareMaps and were eager to learn more. As the days went by, many others wanted to know about CareMaps as well as our research efforts, the Pilot Study and Mapping Yourself. And some of these conversations dove deep into practical issues and tactical plans for introducing and widely deploying CareMaps in communities.

During the last two days, I was part of a working group on “Community Empowerment”. The group included people from Costa Rica, India (Kerala), Singapore and Wales. One key conclusion of our discussions was that we must distinguish between the idea of “person empowerment”, with its sense of maximizing an individual’s quality of life, and that of “community empowerment”, which implies constant balancing juggling of multiple needs. We also noted that there are many things that need to be done, including tools such as the CareMap, to empower individuals and families, and that such are necessary to achieve community empowerment — that you cannot achieve community empowerment by focusing only on community-level organizations and services.

We now have active conversations with Singapore, Nigeria, Kerala and Wales about bringing CareMaps and Atlas expertise to those states.

A shout out to my dear friend Sara Riggare who recommended me to the organizers.

Photo credits: Many of these photos are courtesy of Salzburg Global Seminar/Katrin Kerschbaumer